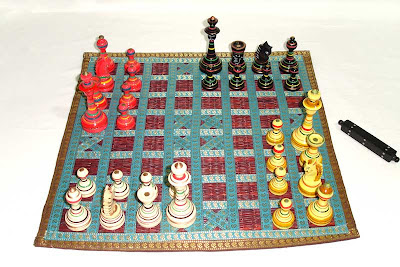 Four handed Chaduranga is the predecessor of the modern Chess. This is played by four players unlike two players in the conventional Chess and also involves the component of chance in the form of a single stick dice or daala.
Four players form two teams of two players. Player-1 plays together with player-3, and player-2 plays together with player-4. Each player gets 8 chessmen which are as follows.

Power of Movement:
Initially arrangement of four armies is as shown below. 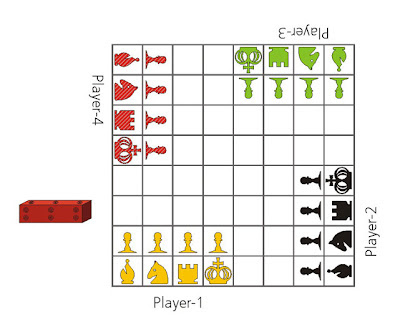 The throw of a daala (stick die) determines which piece can be moved. The daala has four sides, showing 1, 3, 4, and 6 dots. Its values determine which piece to move and it is as follows:

1 dot = move the boat (bishop)
3 dots = move the horse
4 dots = move the elephant
6 dots = move the Raja or a pawn
You must make the move if there is a possibility, even if it means to put a piece at stake. You must pass if you don't own the piece anymore or if you cannot make the move.
A player cannot move his pieces after his own Raja is captured. However, should the partner capture an enemy Raja, then the immobilized party can re-introduce its Raja, and become mobile again. The immobilized player can introduce his Raja on an empty square anywhere on the board. In this case he has to miss his next turn (he cannot roll the die in his subsequent turn). Note that a Raja that has been captured twice cannot be introduced again.
Pawns promote to any of the four types: elephant, horse, boat, or Raja. Piece-type is determined by the promotion square. Hence, a pawn of player-1 gets promoted to boat on a8 and h8, horse on b8 and g8, elephant on c8 and f8, and Raja on d8 and e8.
One can capture one's partner’s pieces except the Raja. Sometimes, it may require to put one's own piece at risk, provided that one's partner has the intermediate move, so that he can remove the threatening piece. It is a common tactic to take a chance and put a piece on a threatened square, hoping that the dice will not allow the opponent to catch the piece. It is a highly cooperative game. Unlike the king in regular chess, the Raja is not a passive piece. It is often possible to attack with the Raja.
Winner: The team that captures both opponent Rajas wins.
Posted by RG Singh at 11:38 AM

Great Game. Its a good combination of luck and skills. Please tell us where I can buy this game.