In the Tiger's Lair

Nanjangud, about 28 kilometres from Mysuru is known for its Nanjundeshwara temple. The gigantic mahadwara (gopuram) of this temple is a handsome structure with beautiful stucco work. Its annual pancha rathotsava - drawing of five chariots (the highest among the five stands 5-storeys tall) is an important event on the almanac of devout shaivites of this region.
Further south from Nanjangud towards Chamarajanagar is a small village of Hemmaragala. Its sole claim to fame is the ancient Sri Santana Venugopala Swamy temple.The place is referred to as Kaundinya Govardhana Kshetra as it is believed that sage Kaundinya Maharshi performed penance here in dwapara yuga (about 5000 years ago). 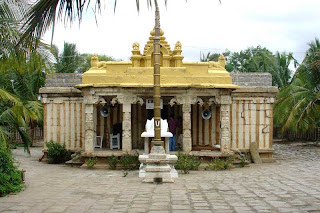 The beautiful chlorite schist image of Venugopala in the sanctum sanctorum is a work of art. 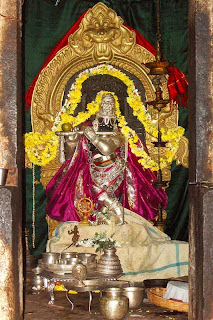 Innumerable miniature cradles are festooned to strings strung across pillars in the navaranga of the temple by faithful devotees as a thanksgiving for the fulfillment of their prayers for the birth of a progeny. 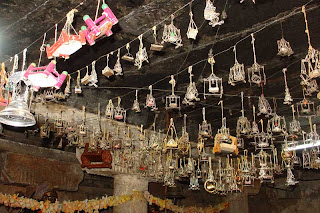 As we step out of the temple’s main entrance, we enter a big hall with tiled roof supported by wooden beams and rafters. The cement flooring here is marked with half a dozen game boards. The well used glistening floor and shallow pits of game boards give away the fact that the place is a haunt of gamers. 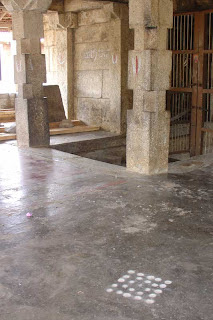 Soon enough a few school going children passing by walk in and very intently watch us photograph the incised floor. Word of mouth spreads; alerted by the commotion, arrive half a dozen villagers to inspect as any visitor is easily identified in this close knit rural setting. They were surprised by interest shown by me to learn the games; as soon as my box of pawns and dice, which I always carry on field visits, is opened there is palpable excitement in the air. On my invitation a teenage boy comes forward to play but he gets restrained by elders. An unwilling Rangaswamy, a man in his fifties is decided to be my opponent. He is cajoled by Sri N. Veeraraghavan, the temple priest, to accept the challenge; usually priest occupies an important position in rural society and his words are followed with regard.

It looked like the honour of the entire village was at stake, a confident sounding Rangaswamy picks four larger pawns and passing me forty-eight smaller ones declares that he, the tiger, would like to hunt goats. First ten minutes are spent introducing goats from corners. Despite a few careful moves by me I was cornered and Rangaswamy claims his first victim, within next two moves he fells half a dozen goats in succession, the onlookers rejoice. I desperately try to save my flock but the predator lurking large keeps me on my toes, a momentary lapse claims three more goats. I am convinced that I have a formidable opponent well versed in the stalking moves of the big cat; children burst into a loud round of applause as another goat succumbs and we end the game. 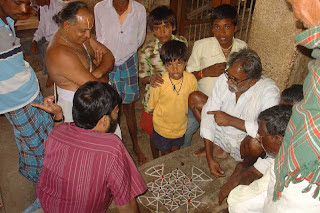 Rangaswamy's folks are delighted by this win. It is in the conversation, later I learnt, that this village has several experienced gamers who play for hours at a stretch during spare time when agricultural activity is at its bare minimum.
Posted by RG Singh at 10:32 PM