The Royal Abode of Govindji

Quarter of a century ago as a teenager on a business trip with my father I visited a city which has mesmerised me ever since. Belonging to a family which is involved in retailing Indian handicrafts and handlooms, traveling across the sub-continent to a select towns and cities to understand and analyse the process of manufacture and purchase artefacts and textiles came to me quite early.

Countless trips to the same city, she beckons me time and again and each trip has been an experience worth cherishing. It was here, long ago, that I tasted a 'paan' for the first time; I diligently chewed every bit of it releasing sweet juicy concoction in my mouth which I swallowed - I have remained a connoisseur of paan ever since.

The old city is enclosed within massive fort walls and entry is through huge gates; a guardian deity at each of these gates is dutifully worshipped till date. My favourite among them is Hanuman who is always magnificently attired and the most amusing sight was when the lord was shown wearing a Jodhpuri bandh-gala - a long coat with closed collars.

One of the magnificent sights of the pink city of Jaipur is the 17th century palace complex within which is the temple dedicated to Govindji. The sandhya aarati bhajans sung by a devout band every evening has a soothing effect on the minds of the faithful.

I visited Jaipur with Raghu this January. On a leisurely walk towards the Albert's Museum, on the wintry morning, I spotted half a dozen men squatting on the ground in front of the Sindhi dharamshala on Mirza Ismail Road, engaged in a game of Chauka Bara. They had scribbled the game pattern on the dusty ground with a piece of chalk; twigs and different sized pebbles became pawns while split tamarind seeds acted as dice. Raghu seized the moment catching the group on camera. 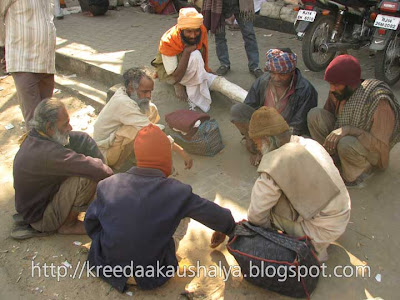 Further away were two teenage boys engrossed in the same game beside their idle cycle rickshaws. 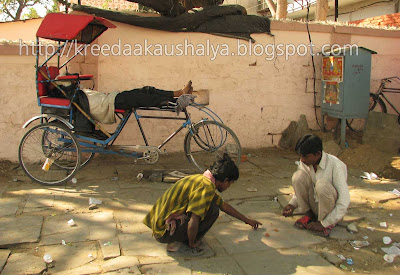 I learnt that the game was called 'Chang-a-bu' or 'Challas' depending upon the version . The latter began with a successful throw of '4' while the play in former began with '1', the pawns which reached the central square in the 5x5 square game board are referred to as 'laal' or red (in most Indian board games the pawns that are in the race are considered as raw fruits and once they reach the destination 'home', they are said to ripen and turn red). I wanted to enquire more but the language became a barrier, the rajasthani dialect which they spoke was beyond my comprehension.

As we walked towards the Ramnivas Garden to visit the Albert Hall, little did I imagine that many more surprises were in store for us. 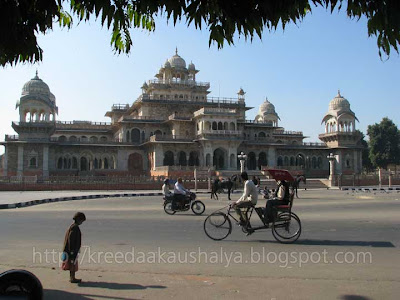 There were large murals on the museum's inner walls which were reproductions of famous works of art from across several civilisations; the one from the persian Mahabharata had a subject of our interest. 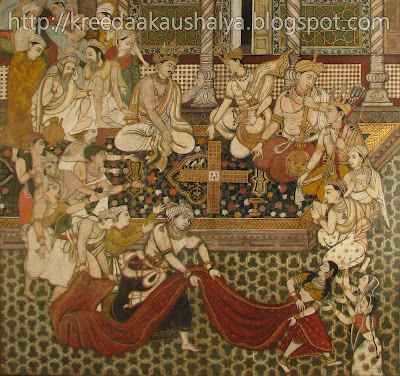 Reminiscent of mughal miniatures, the heavily clothed and turbaned Pandavas and Kauravas sat on a raised platform within a high ceiling hall supported by pillars; the geometric patterns of Bukhara carpet somewhat downplayed the act of Draupadi being disrobed by Dusshasana. Shocked and ashamed by the sudden turn of events, the central characters look sullen, despondent; Pandavas have their eyes downcast, being aware they are helpless in the situation. A scene from the epic stood frozen in time, on that wall.

Further in the galleries were several game boards, boxes and pawns. The museum brochure states that the core collection on display was purchased in 1880s through invitation from craftspersons across India.

A circular table of chess with 18x18 houses having beautiful inlay perhaps from the doab region of Punjab reminded me of the phulkari embroidery. 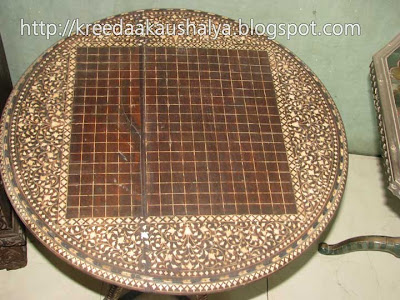 A walnut wood box painted with 4 playing cards amidst floral patterns looked like a miniature char-bag; it was undoubtedly from Kashmir.

The octogonal onyx chess table and another 12x12 board mounted on a latticed brass chowki is similar to the work done in present day Pakistan. 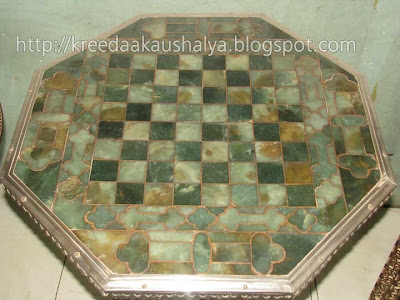 A fine specimen of Sadeli style ivory box is probably from Surat.

The magnificent card box overlaid with lattice worked ivory plates held together by metal pins on a rosewood box from the erstwhile vizianagaram state of Andhra Pradesh. 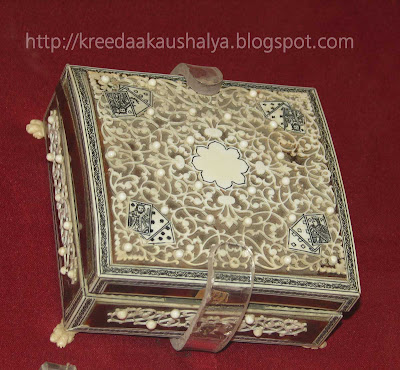 A Pachisi (Pagade) game board with intricate and colourful emroidery is most probably from the Kutch area of Gujarat.

Two miniature paintings in the collection of this museum executed in the registrar style merit mention. The first is a series of the tale of Vaishampayana wherein two seated men in jamas and wearing turbans play a game of Pachisi (Pagade). 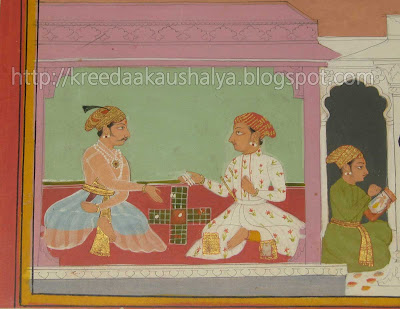 Another miniature from the Baarah-masa series titled Kartika Masa, among other things depicts a couple gambling on the dark diwali night. 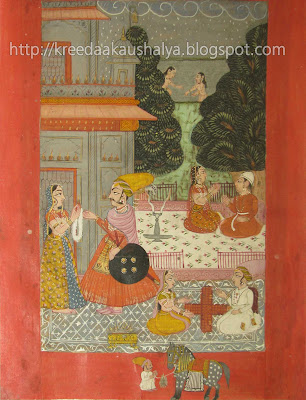 The recently renovated Albert museum which has been attracting visitors for almost 125 years looks all set to welcome museum enthusiasts and captivate their minds in coming years. The excellently produced audio guide is undoubtedly a tribute to its architect and designer Sir Swinton Jacob.