Board Game in a Comic Book

Leo and Capri are two humanoid parrots, who are the lead characters of a new comic book series conceptualized by Mysore Lakshman Amarnath, a dreamer and artist.

So you have  brightly colored panels that tell of the adventures of Leo and Capri  which always ends in one of the parrots encouraging the other by telling a moral story. Something like Aesop’s Fables or the older Panchatrantra. 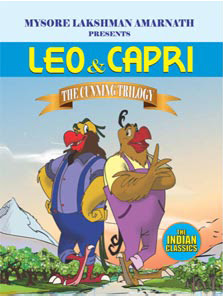 The comic serves a twofold purpose. First we have the entertaining tale of the misadventures of two parrots and how they learn from the fables to overcome their the pitfalls of life.

For instance in the one called, ‘Leo and Capri : The Cunning Trilogy’, three human weaknesses: greed, ingratitude and trickery, are the focus  while Leo and Capri in narrating these tales use them as object lessons that help one to face the slings and arrows of fickle fortune.

Then when one has come to the end of the book, Eureka! Here is a classic board game that beckons the entire family to hunker down and get down to the game of say, 'Aadu Huli Ata’  or Goats and Tigers.

Amarnath justifies the inclusion of a traditional board game saying that it not only firms the bonding of the family but also in creating a chess grandmaster’s brain in the player. He develops the ability of thinking several moves ahead, strategy and teamwork since in this particular game the goats and the tigers have to move with synchronicity to achieve their ends. 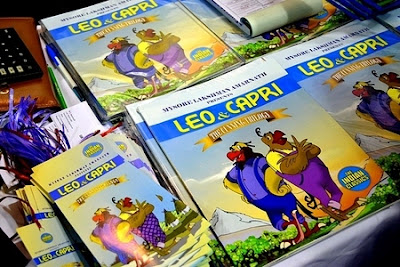 Each  comic book will contain a board game along with clear and precise step-by-step explanations on how to play the game. The game diagram itself is on a large format  so that the comic book itself can be used as a playing board.