Neha Bhatt of Outlook magazine had interviewed us few weeks back and has written the following article which appeared in the 30 August 2010 issue of Outlook.
The article and photograph given below is courtesy of Outlook India magazine. The portions in bold refer to us.
-----------------------
REVIVAL: OLD BOARD GAMES
Pallanguzhi Days
Traditional board games make a comeback courtesy a few enthusiasts
NEHA BHATT 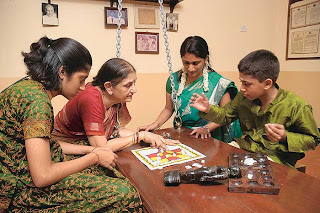 On a flight to Chennai, Balasubramaniam Iyer, a corporate executive from Mumbai, spotted a news item that immediately sent him on a trip down memory lane. It was about a fledgling project in Chennai focused on reviving ancient Indian board games—the very ones he remembered playing as a child in Palakkad, Kerala. “I learned so many mathematical concepts by playing games such as pallanguzhi with my grandmother. I was impressed, therefore, that someone was actually venturing into a world not considered sexy any more, at least not by most children growing up today,” says Iyer. Soon after he got off the plane, Iyer hunted down Vinita Siddharth of Kreeda Games, the subject of the news item, and went back home to Mumbai with several games stacked inside his suitcase.

Ten years later, Iyer doesn’t regret his shopping spree. “I have bonded so much with my wife and daughter through these games,” he says. He isn’t the only one to have rediscovered the joys of gathering around a traditional board game with family and friends over tea and onion bhajjis. Games such as pallanguzhi, adu puli atam, paramapadam, pachisi and chaturanga (see box) are witnessing a quiet revival—and all thanks to groups, based mostly in south India, that have gone out on a limb to rekindle urban interest in them.

It is not as easy as it sounds. Ask the members of Kreedaa Kaushalya, a group set up by Mysore-based businessman R.G. Singh, along with his friends, graphic designer Raghu Dharmendra and general practitioner Dr C.R. Dileep Kumar. “We wanted to play the games we had enjoyed as children and couldn’t find them anywhere. So we travelled across the country and identified places where they were still played and produced, and where they still exist, engraved on temple walls and floors,” says Dharmendra. They then placed orders for the games with craftsmen in villages in Karnataka, Varanasi and Saharanpur. The trio also set up the blog kreedaakaushalya.blogspot.com to share anecdotes gathered from their field trips. Like the joy of stumbling upon a group of half-a-dozen men engrossed in a game of chaukabara, by the roadside on a winter morning in Jaipur. The game pattern was scribbled on the dusty ground with a piece of chalk; twigs and pebbles were being used as pawns, and split tamarind seeds in place of dice. These games are now retailed by Ramsons, a crafts store in Mysore, where you can find them inlaid on ashtrays, boxes and tables, or intricately woven into daris.

At Kreeda Games in Chennai, too, there is a profusion of traditional games, packaged in little cardboard boxes, eco-friendly and easy to carry. “We started off with 50 pieces of eight games each. Now we have 20 games in the market and we sell about 15,000 pieces a year across the country,” says Siddharth, who relied on people’s memories to rediscover long-lost rules of play, her research taking her to small towns, villages and old-age homes.

Diehard fans of Indian games, like R.G. Singh, staunchly believe that this is where real learning lies. “The traditional board games of yore involve physical activity, friendly banter, sharp and witty verbal exchanges and parallel thinking, along with the excitement of beating your opponent,” he says. Their USP, he adds, is that unlike in a game of Monopoly or carrom, there is always scope for improvisation with traditional games—simply because each game has multiple variations.

The charm of these games is that they are also intricately intertwined with social rituals and practices. At traditional weddings in the south, for example, the new bride plays a game of pachisi with her husband as part of the wedding ritual, and is gifted a game to take along with her to her in-laws’ place—a symbolic ice-breaker. Sujata Vijaya, a mother of two who runs a playschool in Chennai, sees these games as an effortless and entertaining way of transmitting cultural information. Her weekends involve a game or two of pagade (the Tamil variant of pachisi), pallanguzhi or bambaram (top and string) with her eight-year-old son Vedh and 12-year-old daughter Sanjana. “It’s a whole different experience from playing a regular, modern game, since we read traditional fables alongside. It’s also nice to bond over the same game with the kids and my in-laws,” says Sujata. “For my daughter Mythili, these games are like any other new toy—but with a different look. For us, though, it’s a way of introducing her to a part of our own childhood without forcing it upon her,” adds Hyderabad-based Rama Badam. Last month, Sujata’s son’s thread ceremony included a session of traditional games for the guests, and each child went home with a set of three as return gift. The games are also proving to be a big hit with nris, says Geetha Rao, of the Crafts Council of Karnataka, whose outlets stock them.

From urban homes, this trend has also moved to schools in the south, which are using them as learning aids, and during events such as Grandparents’ Day at which children and grandparents play them together. Constructive learning fused with tradition, and intergenerational camaraderie apart, it is also the affordability of these games, largely made of cheap materials and priced anywhere between Rs 40 and Rs 1,000, that adds to their appeal, says Sindhu Suneel of Kid’s Central, a school in Chennai.

But if you are a collector like Maya Sitaram, a Mysore-based development consultant, cost is no consideration. Every one of the 60-odd games she owns has a story behind it; they were sourced, she says, from places “where you would not think of finding them, from roadside sellers to temples”. Interestingly, the games are also finding their way up skyscrapers as management tools in glass-walled offices. While Iyer, who is Reliance Industries’ head of human resources, keeps a set or two in the cafeteria for employers to let off steam, at Chennai’s Honeywell office, T. Karthikeyan, head of marketing, has introduced traditional board games in management workshops. “It is fascinating,” he says. “We are discovering hidden management concepts and strategies in the very games that we played as children.”