India is mostly an agrarian society where large households made up of 15 to 20 individuals is a normal occurence, also 3 to 4 generations live under the same roof sharing every resource and also contributing to the agricultural activity which is labour intensive. This pattern of shared living is also followed in cities.

If you have ever wondered how these large families amuse themselves, here is an answer. The regular game of 'Vimanam' is played akin to 'Panchi' by two individuals with 6 pawns each and 6 cowrie shells. Now how would you accommodate an entire household to be a part of the game which is played by only two persons? Simple, improvise the game so that the whole family is a part of fun.

At recently concluded 'Kreedaa Kaushalya' we had a game parlour where children and adults were allowed to play Indian board games; we also taught different games to every body who was interested.

On the third day of exhibition, in walked a group of 3 ladies and 5 kids. From the interaction amongst themselves it was evident that they were a part of a single family perhaps first and second cousins included. The person calling the shots was a lady bedecked in jasmines and jewels wearing an ornate saree; it seemed like the group had just returned from a wedding celebration.

The boisterous group learnt a few games and was interested in sharing with us one of their own. Quickly a game board was sketched on the back of a calendar print using a scale and pen by Mrs. Vijaya Kumari. The game was almost like 'Vimanam' except the final stretch of tracks which was curved (this part is straight in Vimanam); this difference was just aesthetic and in no way affected the play. Hence the group picked our board of Vimanam which we had got designed colourfully in Kalamkari craft. 12 pawns each were placed in both homes; a pair of stick dice started to roll. To get an idea of the game, I suggested Dr. Dilip to join the group, an elderly lady, who was teaching her grandson a game of mancala, volunteered to join the group to equalise the number of players on both sides. Soon enough a middle aged couple, relatives of Mrs. Vijaya Kumari, arrived and promptly joined the game.

The whole group was divided equally into 2 parties such that they sat encircling the board with alternate persons in the circle belonging to one party. Most aggressive within was the leader of that party, by default, who decided the moves of party's pawns. Though one moved the pawns, everybody got a chance to roll dice. The dice started moving from one person to next going round in the circle and so did the pawns which raced along the single track of the game board which met and bifurcated 3-4 times. Large number of pawns (12) on each side ensured that the game's duration stretched long. The game took almost 2 hours to finish and later I learnt that it was called 'Aeroplane' which is nothing but the anglicised 'Vimanam'. It was at this juncture that Raghu suggested that we rechristen the game as 'Pushpaka Vimana' which is the mythological flying machine used by lord Rama to travel from Lanka to Ayodhya after vanquishing Ravana. 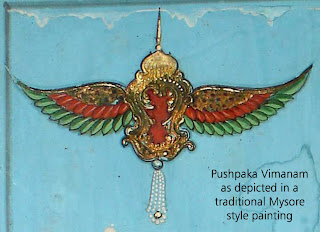 This mean-machine is reputed to have an ever expanding seating capacity such that for all persons included one extra seat remained vacant.

At our next exhibition of Kreedaa Kaushalya in the summer of 2009 we intend to introduce this game to visitors.