In Divine Slumber on River's Edge

This sacred hymn is chanted by millions of devout hindus while invoking the seven mighty and sacred rivers ceremonially in the sacred pot during elaborate rituals associated with traditional worship.

The rivers Ganga, Yamuna, Godavari, Narmada and Kaveri have been a part of the Hindu ethos for a few millennia now and continue even to this date. It is believed that the river Saraswati changed course and vanished deep down the bowels of earth, archaeologists are still researching to chart the course of this elusive river goddess.

The Sindhu (Indus) now flows fromPakistan into India as a tributary in the Himalayas at Leh in the state of Jammu and Kashmir. However, the above verse continues to reverberate countless times across the sub-continent till today, even in the changed geo-political circumstances.

Rivers in India have been worshipped as goddesses (except Brahmaputra which is considered a god) since ages, a dip in the waters and a visit to the important shrine on their banks has immense significance to the believer.

Among the seven holy rivers is the Kaveri (also spelt Cauvery) which originates at Talakaveri in the hilly regions of Kodagu (Coorg) amidst the verdant green slopes where the finest coffee, rice, oranges, cardamom, pepper and vanilla is cultivated by Kodavas, a martial race, who have inhabitated this land since time immemorial.

The mountain born river loses height and flows eastwards in the table-land of Karnataka and then into the neighbouring state of Tamilnadu; traversing a distance of 785 kilometers she merges into the salty shores of the Bay of Bengal at Poompuhar.

The posture of the deity in the sanctum sanctorum of these temples is that of Lord Vishnu in his manifestation of Ranganatha; he is seen reclining on the coiled body of serpent Adi Shesha whose seven mighty hoods fan out majestically at the head of the lord. Ranganatha's divine consort Lakshmi (called as Ranganayaki) is seen seated beside, admiring her beloved.

The river-islands of Srirangapatna, Shivanasamudra and Srirangam (respectively called Adi Ranga, Madhya Ranga and Antya Ranga) are where the three temples located. The temple complex at Srirangam near Tiruchirapally (Trichy), Tamilnadu is undoubtedly the grandest of all the three. 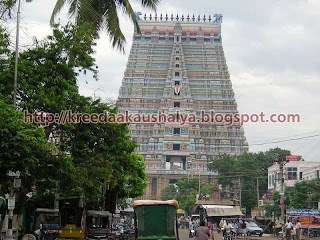 The sprawling temple complex which is spread over 150 acres, has gigantic gateways topped with towering pyramidal gopuras, in four cardinal directions.

It was in August 2008 that I along with Dr. Maya, Dr. Dileep and Raghu (Dharmendra) visited this temple. Bustling with activity, the area around the outer gopuras was choked with vehicular traffic, the inner courtyard housed small shops selling religious books, souvenirs and goods associated with ritual worship; we had to jostle for space with a milling crowd of pilgrims and stray bovines. The enormous granite pillared halls and massive doorways swarming with pilgrims gave us an idea that this was a very busy place of worship with devotees in attendance at all times.

We hurried past the sixth enclosure (there are seven in total) in a brisk pace to enter the inner courtyard, the neat granite floor looked like it had been reworked and relaid. As we inched forward amidst the multitude of worshippers and reached the inner perimeter which housed the central deity, the coarse floor gave way to smooth mirror polished granite, the air conditioner which was whirring away was creating commotion and devotees, many of them, were chanting prayers in silent murmur. In anticipation of the magic moment to have a close view of the lord we were virtually pushed into place at the door of the sanctum. 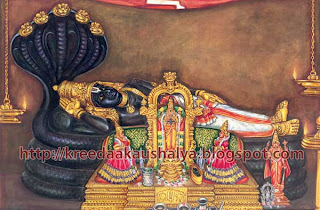 Lo and behold, in the unsteady flicker of half a dozen oil soaked lamps the heavily bejewelled lord, adorned with fresh flowers and basil, lay in deep slumber oblivious to the commotion all around.

An equally hurried exit from the main shrine towards sub shrines gave us an idea of the grandeur of the religious complex. In a reduced pace while admiring the granite images it was evident from the faint fading colours on the mortar of the ceilings and walls that lavishly painted murals must have adorned it once upon a time. We were now entering the less frequented areas which looked like they have been untouched by restoration, thus retained their antiquity. 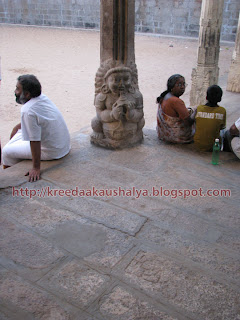 As we entered the pavilion in front of the devi shrine, within minutes we were able to locate a dozen game patterns. Several games etched in corners lay under a thick layer of dust and many others were in various stages of disappearing due to being rubbed by hundreds of feet day in and day out. It was here that for the first time we saw the 'P' shaped single track game. 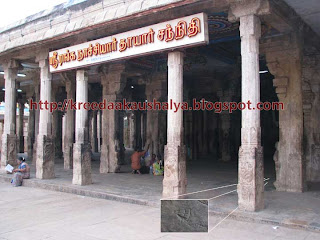 The pavilion in front of Sri Rama shrine had a lone Adu Huli Ata (Goats and Tigers). 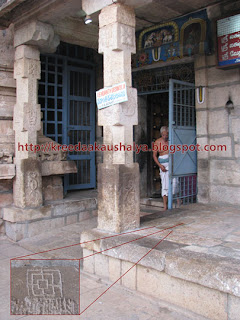 The Vedanta Deshikar shrine had a perfectly preserved Nine Men's Morris on the elevated platform. 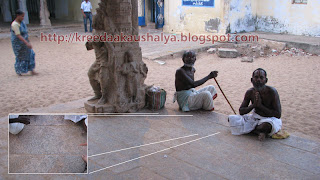 A pavilion bereft of carvings amidst a sandy patch perhaps used for minor religious events was the haunt of men seeking alms; it had an incised pattern of Adu Huli Ata. 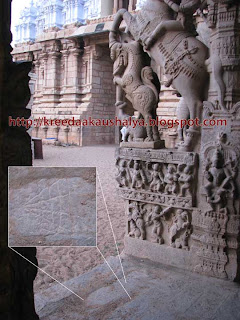 As we moved towards the ornate Sheshagirirayar mantapa, a group of kanjeevaram clad women were practicing a bhajan, the setting sun and the unlit thousand pillared pavilion acted as a dampner for our game hunting.
As we decided to call it a day, Dr. Maya spotted a perfectly preserved Adu Huli Ata beside a pier which had rearing horsemen trampling tigers and elephants.

The millennia old structure refused to share any more of its secrets. We wanted to probe more but were left with only few precious minutes; we dashed out to our waiting taxi. Zipping through the crowded evening roads of Trichy Fort area, we were in time at the railway station to catch the train back to Mysore. 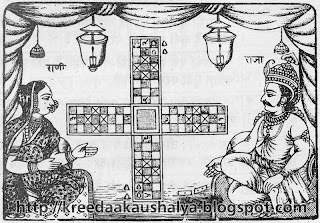 This family entertainer reminded me of the group games popularised by Krishnaraja Wadiyar III, the motive of this improvisation is simple that more persons can be involved in the same game. 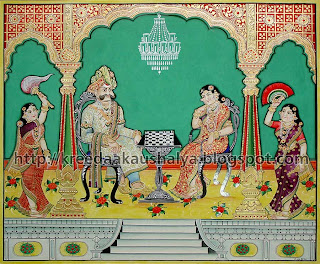 It is well known that this benevolent ruler had a large number of courtiers and subjects who were ardent gamers as well, this fact is attested in the murals executed on the walls of the game room in the Jaganmohan palace situated in Mysore which depict many games and various partial solutions of the Knight's Tour. Also some of his courtiers and ladies from the zenana are shown involved in sporting pastimes. 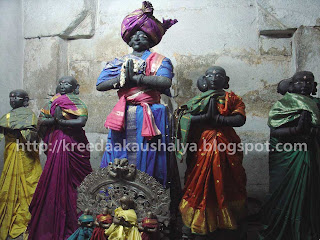 Krishnaraja Wadiyar III had 3 principal wives and several concubines as that practice was in vogue during those times. Perhaps these group games were introduced so that the royal ladies got a chance to roll the dice together in the seclusion of the zenana area. 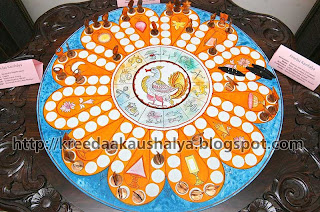 The Navagraha Pagade Ata is the most unique and complex game invented by this genious. It includes components of the Indian system of astronomy and astrology. This board game painted on canvas is based on a surviving specimen at Jaganmohan palace. The circular board has 12 zodiac signs in the centre and 12 petal shaped arms form a perfect rosette to guide the path of the pawns. Within each of the petals nine planets have been incorporated. Symbols and colors of planets are as described in the Kautuka Nidhi of Sri Tattva Nidhi and as also in traditional almanacs and horoscopes. Three petals have floral designs in the centre to compliment the pattern. There are four pawns for each player which match the above description. The movement of the pawns is decided by the throw of three stick dice which have 1, 3, 4 and 6 notches. 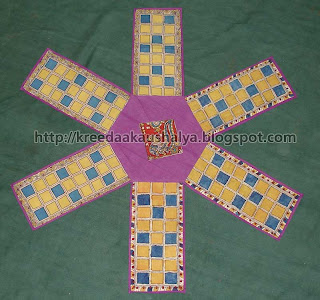