Abstract of the Talk by RG Singh

RG Singh has been invited by the 19th International Board Games Studies Colloquium being held at Nuremberg, Germany from 12 to 16 April 2016. He will be presenting a talk on 'Chaduranga Chakra' of Mummadi Krishnaraja Wodeyar. Following is the abstract of the talk.

Mysuru (earlier Mysore), erstwhile capital Wodeyar kings, is a city of Palaces, mansions and tree-lined boulevards. Herein resides the intangible heritage of this city. One such heritage is that of being a repository of extraordinary board games whose architect was the Maharaja of Mysuru himself, Krishnaraja Wodeyar III (b. 1794; r. 1799-1868 C.E.)

The reign of this king saw Mysuru, becoming a ‘hothouse’ of cultural renaissance.

This, however, was short-lived. Charges of maladministration and sundry other charges were levelled by the British (who colonised the sub-continent) and soon enough the kingdom’s administration was in the hands of British East India Company and the king left with a meagre pension. This period lasted from 1831 to 1881 C.E.

The king Krishnaraja Wodeyar III (a.k.a. Mummadi), with enforced leisure on his hands, sought inner peace in the mysterious world of Traditional Board Games.

Mummadi was just 38 years old when he was divested of the administration of his kingdom. And at that age he was already a master of board games, as a player and as an ingenious inventor who elaborated traditional games by incorporating varied concepts like morality, astrology, religious hymns, etc.  All these were transcribed by teams of artists and scribes into illustrated manuscripts.

There are at least six illustrated board game manuscripts that are attributed to Mummadi. One version that will be the subject of the talk by R.G. Singh is the Chaduranga Chakra. The manuscript is elegantly inscribed in the Kannada script and has around 208 pages. 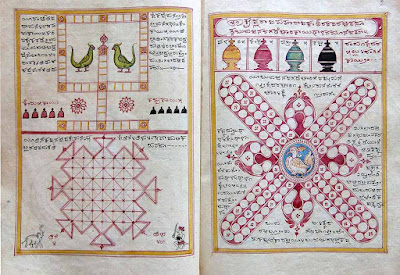 The book does not have a foreword giving rise to the speculation that it may be part of several similar volumes.  It is in the Chaduranga Chakra that one comes across the famous Knight’s Magic Tour that has intrigued board game theoreticians across the world.

The Chaduranga Chakra incidentally is not just about the various polyrhythmic variations about chess but also touches upon in detail about two other ‘inventions’ of the king. One is the ‘Shivasauyujya Mukti’ Pagade (Pachisi) where in the centre is the figure of the deity who appears as ‘Mukhalinga’ along with Nandi (Bull mount of Shiva), Ganesha (elephant headed Hindu God) and several other deities. The four players have six pieces each whose starting squares are marked within the Lotuses at the corners of the playing area. The other invention of the king is the ‘Devisayujya Mukti’ game dedicated to the Goddess Chamundeshwari (the tutelary deity of Mysuru rulers).

Mummadi’s innovations in Pachisi game like eight handed and twelve handed Pachisi with its spiritual implications is remarkable for its ingenuity. A couple of games of Ganjifa playing cards invented by Mummadi also find a mention in this book.

Krishnaraja Wodeyar III died on 27 March 1868. The corpus of his gaming achievements have not been properly studied till date. Deciphering Chadauranga Chakra is a step in this direction.
Posted by H.S. Dharmendra at 3:04 PM

How to get hands on this book. I need a copy of it.
I deal wit modern day ciphers used in network communication technologies .
Please post me info or links I am very much Intrested.

Great Honour Sir ! Wish you all the best.

Even in the Board Game Studies XIIIth Colloquium held in Paris from Wednesday 14th to Saturday 17th April, 2010, Mummadi's work was discussed. German scholar Irving Finkel in his address on April 17 spoke on "A very early counting system in traditional Indian games," and paid homage to Mummadi Krishnaraja Wadiyar III, the Master of Board Games.

I wish some research is done this .

But sadly his some of his colossal works remain unpublished by the UOM which is spending on crass self exhibitionism in the name of centenary celebrations forgetting that it was Mummadi who laid the foundations for modern education by starting Raja's free school way back in 1831.

Something needs to be done in this regard.

RGS & RD duo deserve kudos for their sustained effort to keep the name of Mummadi in limelight. Wish you all the success which you ricly deserve.

I like the site very much. It broads my mind.
Handicraft Manufacturer in India

Excellent initiative Gyaneswar.
Wish you all the best.
Thanks
Vasanth