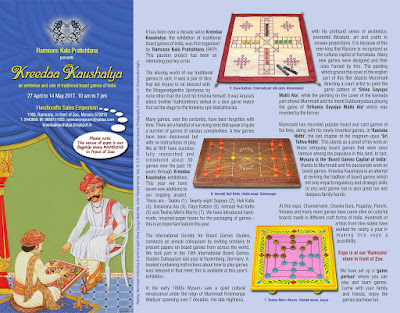 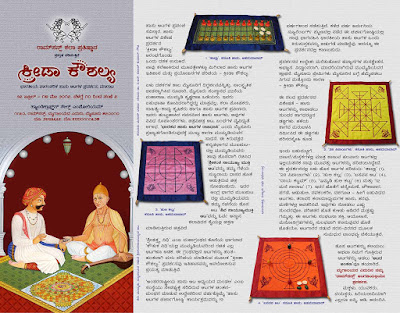 It has been over a decade since Kreedaa Kaushalya, the exhibition of traditional board games of India, was first organised by Ramsons Kala Pratishtana (RKP). This passion project of RKP has been through an interesting journey so far.

The alluring world of our traditional games is vast. It was a pair of dice that led Arjuna to be blessed with the Bhagavadgeetha Upanyasa by none other than the Lord Sri Krishna himself. It was Arjuna's eldest brother Yudhishthira's defeat in a dice game match that set the stage for the timeless epic Mahabharata.

Many games over the centuries are forgotten due to sheer neglect. There are a handful of surviving texts that speak of quite a number of games of various complexities. A few games have been disco-vered but with no instru-ctions of play. We at RKP have successfully resea-rched and introduced about 30 games over the past 10 years through Kreedaa Kaushalya exhibitions. This year we have seven new additions to our ongoing project of ancient games of India. These are - Taabla (1), Twenty-eight Sepoys (2), Huli Kallu (3), Basavana Ata (4), Daya Kattam (5), Immadi Huli Kattu (6) and Twelve Men's Morris (7). We have introduced hand-made, recycled-paper boxes for the packaging of games - this is an important feature this year.

The International Society for Board Games Studies, conducts an annual colloquium by inviting scholars to present papers on board games from across the world. We took part in the 19th International Board Games Studies Colloquium last year at Nuremberg, Germany. A booklet containing instructions about how to play games was released in that meet; this is available at this year's exhibition.

In the early 1800s Mysuru saw a quiet cultural renaissance under the reign of Mummadi Krishnaraja Wadiyar spanning over 7 decades. His late Highness, with his profound sense of aesthetics, promoted literature, art and crafts to unseen proportions. It is because of this seer-king that Mysore is recognized as the cultural capital of Karnataka. Many new games were designed and their rules framed by him. The painting which graces the cover of the english part of this flier depicts Mummadi directing a court artist to paint the game pattern of 'Shiva Sayujya Mukti Ata', while the painting on the cover of the kannada part shows Mummadi and his friend Subbarayadasa playing the game of 'Srikanta Sayujya Mutki Ata' which was invented by the former.

Mummadi has recorded popular board and card games of his time, along with his newly invented games, in 'Kautuka Nidhi', the last chapter of his magnum opus 'Sri Tattva Nidhi'. This stands as a proof of his work on these intriguing board games that were once famous among the populace in this land. In fact, Mysuru is the 'Board Games Capital of India', thanks to Mummadi and his passionate work on board games. Kreedaa Kaushalya is an attempt at reviving the tradition of board games which not only impart regulatory and strategic skills to any avid gamer but also great fun and deepens family bonds.

At this expo, Channemane, Chauka Bara, Pagaday, Panchi, Vimana and many more games have come alive on colorful boards made in different craft forms of India. Hundreds of artists from nine states have worked for nearly a year in making this expo a possibility.

Expo is at our 'Ramsons' store in front of Zoo.

Come with your family, friends; enjoy the games and have fun.
Posted by H.S. Dharmendra at 6:07 PM