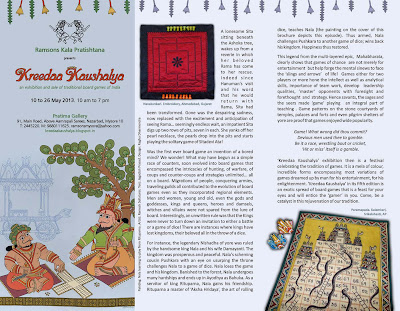 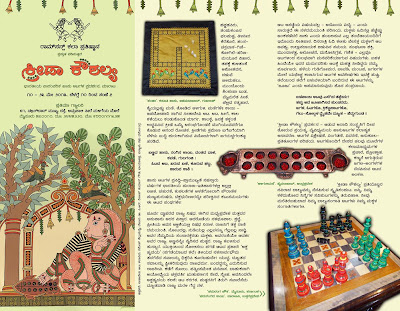 Kreedaa Kaushalya
a summer biennale of traditional board games of India

A lonesome Sita sitting beneath the Ashoka tree, wakes up from a reverie in which her beloved Rama has come to her rescue. Indeed since Hanuman's visit and his word that he would return with Rama, Sita had been transformed. Gone was the despairing sadness, now replaced with the excitement and anticipation of seeing Rama… seemingly endless wait, an impatient Sita digs up two rows of pits, seven in each. She yanks off her pearl necklace, the pearls drop into the pits and starts playing the solitary game of Sitadevi Ata!

Was the first ever board game an invention of a bored mind? We wonder! What may have begun as a simple race of counters, soon evolved into board games that encompassed the intricacies of hunting, of warfare, of coups and counter-coups and strategies unlimited... all on a board. Migrations of people, conquering armies, traveling guilds all contributed to the evolution of board games even as they incorporated regional elements. Men and women, young and old, even the gods and goddesses, kings and queens, heroes and damsels, witches and villains were not spared from the lure of board. Interestingly, an unwritten rule was that the Kings were never to turn down an invitation to either a battle or a game of dice! There are instances where kings have lost kingdoms, their beloved all in the throw of a dice.

For instance, the legendary Nishadha of yore was ruled by the handsome king Nala and his wife Damayanti. The kingdom was prosperous and peaceful. Nala's scheming cousin Pushkara with an eye on usurping the throne challenges Nala to a game of dice. Nala loses the game and his kingdom. Banished to the forest, Nala undergoes many hardships and ends up in Ayodhya as Bahuka. As a servitor of king Rituparna, Nala gains his friendship. Rituparna a master of ‘Aksha Hridaya’, the art of rolling dice, teaches Nala (the painting on the cover of this brochure depicts this episode). Thus armed, Nala challenges Pushkara to another game of dice; wins back his kingdom. Happiness thus restored.

This legend from the multi-layered epic,  Mahabharata,  clearly shows that games of chance  are not merely for entertainment  but help forge the mental sinews to face the ‘slings and arrows’  of life!  Games either for two players or more hone the intellect as well as analytical skills, importance of team work, develop  leadership qualities, ’master’ opponents with foresight and forethought  and  strategy. Hence savants, the sages and the seers made ‘game’ playing  an integral part of teaching . Game patterns on the stone courtyards of temples, palaces and forts and even pilgrim shelters of yore are proof that games enjoyed wide popularity.

Game! What wrong did thou commit?
Devious men used thee to gamble.
Be it a race, wrestling bout or cricket,
‘Hit or miss’ itself is a gamble.

‘Kreedaa Kaushalya’ exhibition then is a festival celebrating the tradition of games. It is a mela of colour, incredible forms encompassing most variations of games dreamed up by man for his entertainment, for his enlightenment. ‘Kreedaa Kaushalya’ in its fifth edition is an exotic spread of board games that is a feast for your eyes and will entice the ‘gamer’ in you. Come, be a catalyst in this rejuvenation of our tradition.