Today's 'Times of India' Bangalore edition has carried an article on our research on board games as well as an informal interview of me and R.G. Singh. Ms. Parvati Harikumar of Time News Network has authored the article. You can find the article here. Below this, you can read complete article.
----------------
GAME ON! LET THE DICE ROLL
Its time to relive the magic, of board games thanks to the pioneering efforts of three researchers from Mysore
Parvathi Hari Kumar | TNN
Pallanguzhi, Navakankari, Adu Huli, Chauka Bara, Chaupar. Ring a bell maybe grandma mentioned them when she reminisced about her childhood and how long afternoons were spent.
When Nintendo, PlayStation laid siege to drawing rooms and lazy afternoons, these traditional board games were forgotten and the beautiful mancala boards tucked away in the attic.
Board games have a history stretching to antiquity in India. Stories abound in Indian mythology and culture of kings and gods obsessed with them. It was Duryodhana's deception at chaupar or pachisi that set up the epic war of the Mahabharatha. Mughal king Akbar too was a great fan of chaupar. Fatehpur Sikri has a courtyard which doubled as a chaupar board. And the pawns the women from his harem!
Closer home is the Jaganmohan Palace in Mysore. When the British took over the reins from Krishna Raja Wodeyar III and reduced him to a figurehead, the king spent his time not just playing board games but also inventing some very complex games. On the third floor of the (Jaganmohan) palace, the walls are painted with the games he invented and improvised upon. At the 13th Board Games Colloquim in Paris last month, German scholar Irving Finkel in his address paid homage to Wodeyar III, the master of board games. 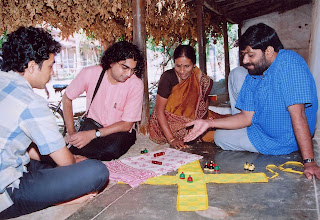 It was a challenge that set off this trio from Mysore R G Singh, businessman, Raghu Dharmendra, graphic designer and Dr C R Dileep Kumar, a general (medical) practitioner on a delightful discovery. They unearthed a treasure trove in their quest to document traditional Indian board games during their travels across Karnataka, Tamil Nadu, Maharashtra, West Bengal and Andhra Pradesh.
'When I asked research scholars for information on Indian board games, I found them reluctant to talk about them. I took it up as a challenge and set out to document them,' says Singh.
Their favourite haunts were village quadrangles, old homes and temples. 'Just look around the temples. You'd be surprised at the games you'll find etched on the stones. Sometimes the uninitiated dismiss them as part of the architecture or inscriptions,' says Singh. At times, it takes an eagle's eye to spot the games. At the Chennakeshava temple in Belur, they found a game of goats and tigers etched on a stone inside the temple well. 'Masons must have etched the game during construction, and then used the stone to build the well,' reasons Singh.
'People are bemused when they see us photographing the floors, and not the temple or its architecture,' says Dharmendra. 'Before you know it, a conversation unfolds, dice, cowrie shells or pebbles roll out and a palpable sense of excitement grips the air as a game is on. Amazingly, people open up when they see our interest in the games. They call for very little investment sticks, tamarind seeds or even buttons can be used as pawns,' Dharmendra adds. 'It speaks volumes of our ancestors' creativity,' chips in Singh.
But it is Krishna Raja Wodeyar III's genius that never ceases to amaze Singh.Trying to solve some of his games could keep you occupied for years, he says. One of his most complex games is the Navagraha Pagade Ata with Indian astrology and astronomy incorporated into it. In the book Sritattvanidhi, currently with the Oriental Research Institute and Kuvempu University, the king in the last chapter Kautuka Nidhi, describes the games he invented and their rules. Most manuscripts written by the king are either in museums abroad or with private collectors in Europe.
'Framing the rules is no easy task. Many a times locals have helped us unravel the games and their rules,' says Dharmendra on whom rests the task of chronicling the rules. 'Indians,' laughs Singh, 'are experts at introducing subrules in games when they find themselves losing.' 'The loser does'nt get away with just losing. In a game of pallanguzhi or alugulimane, the loser is humiliated with songs, or he has to run around with the board on his head. In Chamrajanagar, the rules are that the 14 pits (of aligulimane) are filled with ash, and the loser has to blow them away,' reveals Dharmendra.
The games have evoked great interest among western researchers. They are said to improve mathematical skills, dexterity, memory, hone logical and strategical thinking, even keep dementia and Alzheimers at bay.
V Balambal, former history professor, University of Madras, and author of 'Folk Games of Tamil Nadu' says: Pallanguzhi (Oware in Africa and Warri in the Caribbean) is used in schools in the West Indies and Africa to improve mental skills and teach arithmetics. Balambal rues that while these games are often topics of research in the West, they have evoked very little interest back home. 'My Spanish friend, who is visually impaired, has proved that Pallanguzhi can be played even by them,' she reveals.
In Karnataka, intricately linked to the revival of these games are also the craft traditions of the state. The Ramsons Kala Pratishtana (RKP) in Mysore has found a novel way to keep alive the games as well as the dying crafts. 'We used some crafts like Bidriware, Kasuti embroidery, the Navalgund dhurries to create game boards and designs,' says Singh, also the secretary of RKP.
Interwoven cleverly on the Navalgund dhurries are a game of pachisi with the traditional peacocks woven delicately around it; the Kasuti embroidery too is used to weave games; inlaid on ashtrays, boxes and tables using bidriware are games like adu huli (tiger and goat) and the traditional turning techniques of Channapatna artisans are used to make colourful pawns.
Next time you visit grandma, leave that laptop and iPod behind and get her to play her favourite board game. Her mental agility could stump you.
Posted by H.S. Dharmendra at 5:30 PM

You people are doing a great job. You can also update about 'Ala Guli mane, ಅಳ ಗುಳಿ ಮನೆ '(I loved playing this game when I was young).Keep up the good work. All the very best :)

'Indians,' laughs Singh, 'are experts at introducing subrules in games when they find themselves losing.'

I think that phenomenon is universal, actually. It certainly applies in my American home, especially during marathon sessions of Monopoly!
- - - - - - -
Jack@PCS
chess sets and more