Article in DNA ya newspaper

The DNA newspaper in its ya! supplement of 23 October 2011, carried an article on board games and the activities by Ramsons Kala Pratishtana. Below is the image of the article as it appeared in the newspaper. 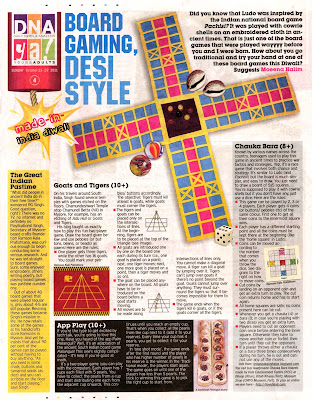 Posted by H.S. Dharmendra at 2:33 PM 2 comments: Links to this post

The 'Parent Circle', a Chennai based monthly magazine has carried an article ' The Revival of Traditional Games' and has featured Kreedaa Kaushalya. Following are the snapshots of that article. 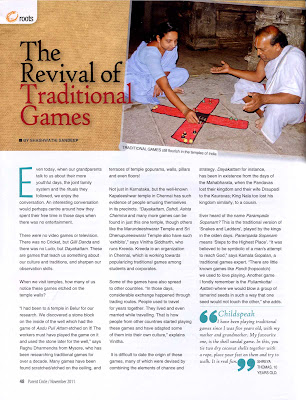 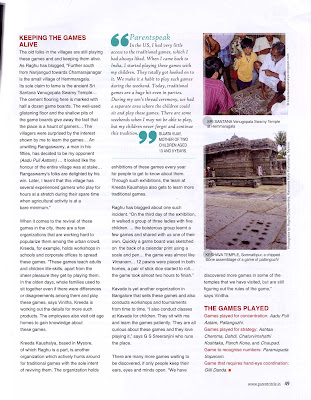 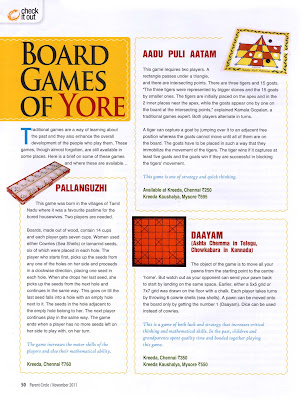 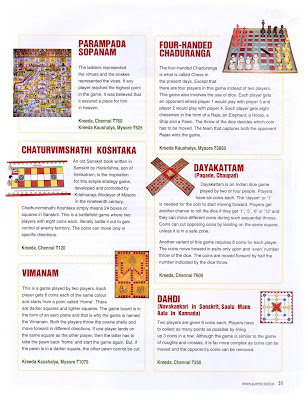 Posted by H.S. Dharmendra at 7:40 PM No comments: Links to this post

Bavarian Games Archive
The Bavarian Games Archive located at Munich, Germany, is a study center for board games. It is collecting contemporary board and family games. The archive holds more than 15.000 different board games and a library of books and other printed materials dedicated to board games including over 2000 volumes. It organizes workshops, public games events and an annual international fair for game inventors. This organization will host the Board Game Studies Colloquium XV. The Colloquium will take place in the community center of Haar at the peripheral of Munich. Colloquium language is English.

Prof. Kalegowda Nagavara, noted litterateur and folklorist of Mysore inaugurated the Kreedaa Kaushalya exhibition on Thursday 21 April 2011 at 6.30 pm at Pratima Gallery. He was accompanied by his wife Smt. Kempamma Nagavara. The informal function was attended by a select group of invitees and well wishers of Ramsons Kala Pratishtana.
Posted by H.S. Dharmendra at 4:40 PM No comments: Links to this post

App of an old game

I came across this interesting application of a variation of Tic-Tac-Toe which is an old Indian game. This game is known by many names including “Padavettu”, “Nira”, “Pada” and “Kallukali” in Kerala, India. Thanks to Dhanan Sekhar Edathara who gave its link on the Facebook group page of Ramsons Kala Pratishtana 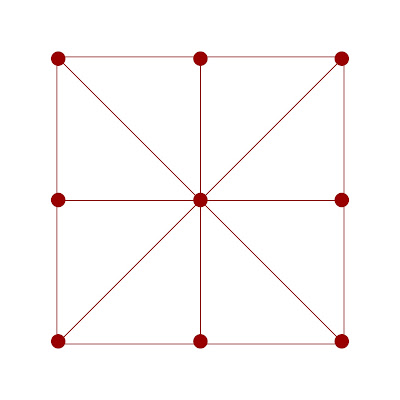 Posted by H.S. Dharmendra at 8:57 PM No comments: Links to this post

Paintings which adorn this year's exhibition brochure are created by the artist Sri F.V. Chikmath from Dharwad. Getting trained in traditional Surpur miniature paintings Chikmath later interpreted this traditional idiom with a blend of his creativity on canvas in acrylic medium. When we at Ramsons Kala Pratishtana came across his impressive works, we asked him whether he can do a couple of canvases with board game theme and he readily agreed. The result is below for you to see. 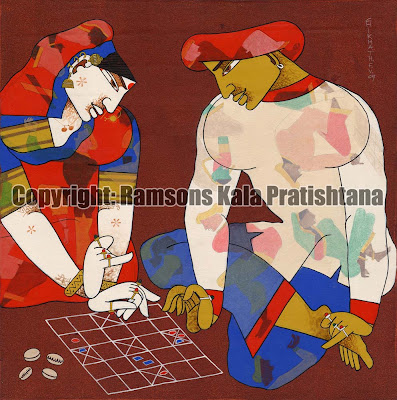 Here you can see a couple playing the popular board game of Karnataka - Chaukabara which is called by several other names in and outside the state. 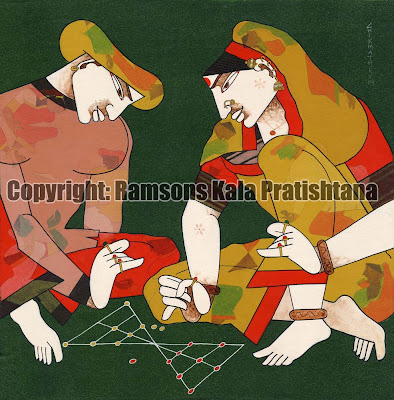 This canvas depicts another pair engrossed in the game of Nav Keti keta, a war game.


Posted by H.S. Dharmendra at 7:01 PM No comments: Links to this post

Posted by H.S. Dharmendra at 5:00 PM No comments: Links to this post

Last month I designed a board for Snakes and Ladders game in traditional Indian design of Mukti Pata or Gyan Chaupar to be created using Kalamkari craft form. I was surprised yesterday when I saw the game board created out of my design so quickly and sent by courier. Given below are the images of my design and the board created thereof. 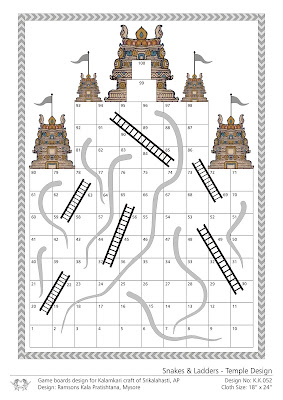 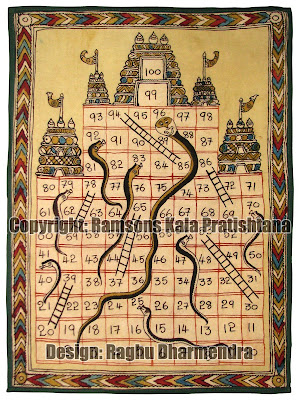 Posted by H.S. Dharmendra at 1:02 AM 2 comments: Links to this post

Board Game Studies Colloquim 2011 at Belgium

The International Society for Board Game Studies holds yearly colloquia in which scholars, university professors, museum curators, historians, archaeologists, psychologists, mathematicians, game inventors, collectors and others share their research results on board games. Previous BGS colloquia have been held in the Netherlands, Italy, Switzerland, Spain, Germany , USA, UK, Brazil, Austria, Portugal, Israel and France.
The KHBO-Spellenarchief, a study center for board games, affiliated with a Teachers Education Department, will organize the Board Game Studies Colloquium XIV. The archive holds more than 20.000 different board games and organises workshops and seminars for students and professionals.
The Colloquium will be hosted at the campus of the KHBO (Katholieke Hogeschool Brugge Oostende) in Brugge, Belgium.
For more information click here.
Posted by H.S. Dharmendra at 9:33 PM No comments: Links to this post 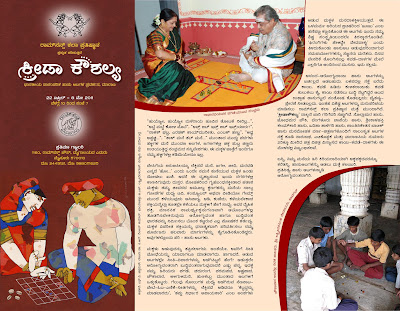 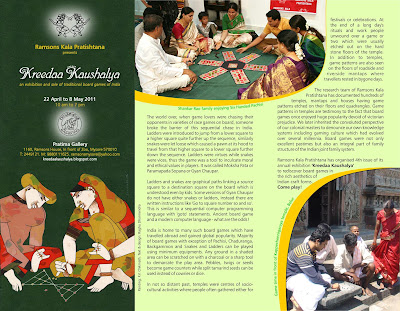 Posted by H.S. Dharmendra at 9:19 PM No comments: Links to this post 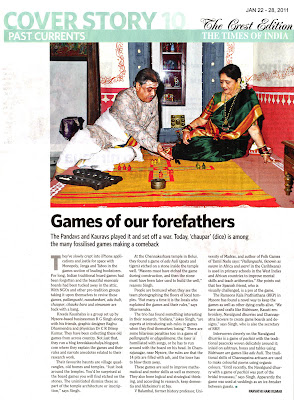 Posted by H.S. Dharmendra at 8:56 PM No comments: Links to this post

The New Year special issue of Deccan Chronicle (31-12-2010) carried an article on our efforts to revive board games authored by Mr. Rahul Manigram. The good word is spreading about the board games.
Posted by H.S. Dharmendra at 7:00 PM No comments: Links to this post